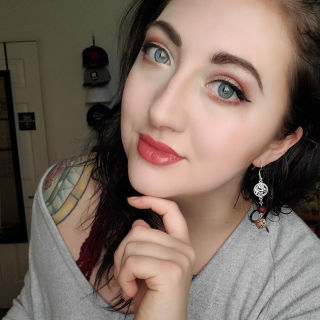 I'm a new blogger with a passion for well.. just about everything. While everything definitely doesn't always go according to plan I definitely try! I have to boys ages 4 and 2 so I am always busy, and always looking for ways to try and make our day more more smoothly. I believe that this is possible with a good routine and organization. Also I am currently on a journey to bring out the best me. To achieve this i am: making more time for me, following the Ketogenic lifestyle, and trying to become overall healthier.

Good Morning! Here we are starting yet another Monday.

I don’t know about you, but over the weekend all I wanted was snacks. To just go through my days munching on things. This actually happens to me ALL the time. I just love snacking. I feel like I’m always on the move, so having something I can munch on over a period of time just sounds amazing. This was definitely a HUGE problem for me before I started Keto, and I’m sure it was part of the reason I had such a hard time losing weight. One of the many pieces of a puzzle.
After starting Keto its definitely been a lot better, there are still days though where the snack attack is real. It did take me a while to find some keto snacks that were quick enough for my level of busy/ laziness. There are some times where I’m willing to take more than a few minutes but not usually.

So lets get started.

We will start with my favorite no prep. Peanut Butter!! Specifically Smuckers Chunky Peanut Butter, or Creamy is really tasty too. This is almost always my go to snack. It may not be the best choice but its probably my favorite. It is a higher calorie choice so it’s not always good that it is my go to snack. It never disappoints and is filling. I do have it a few different ways. Measured out With celery is probably the healthiest option, so it is the one I try to go for. I actually find it pretty filling which is good because of the high calories in the Peanut Butter.

I also like to have a quick spoonful here and there. This is pretty dangerous because it will not be accurate with tracking amounts but in a pinch it’s a great quick snack. If I’m craving a sweeter snack my peanut butter fix is to take a serving ( 2tbs) of PB and add a sprinkle of Lily’s chocolate chips to it. If I had to guess I’d say about 20 chips (60 is a serving.)

I used to scoop a bite of PB with a square of a 85% chocolate bar. This was is dangerous in the same way as using a spoon. Its not easily track able and also it seems like such a little harmless treat that you could just not track it. This is not a good practice. PB and chocolate both have calories and carbs so if you don’t track these treats you can easily go over. This can cause weight loss stalls and bump you out of ketosis.
The other no prep snack that I really like are pork rinds. BBQ is definitely my favorite. I have tried to stop having these as much however because I seem to always have too many. They are just so crunchy and salty that its very hard to stop eating them. Even though they are a zero carb snack they can still cause you to get your protein up to high, quickly.
This also goes with Nuts. They are a wonderful quick, filling and tasty snack. But they can quickly get your calories, protein and carbs up. When traveling though nuts are a readily available snack. I actually had a good find over this weekend. I went to my in-laws without any snacks. Very unlike me because I usually like to be prepared. On a quick trip to the dollar general I found a nut mix with pistachios!! I probably over did it snacking on those, but it was super delicious. 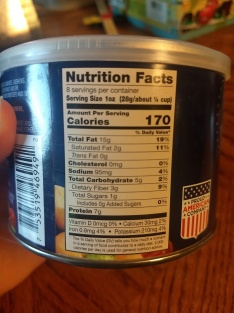 The next quick snack I like is crisps. There are three different kinds of crisps that I like to make. The fastest would be either pepperoni or salami crisps. I prefer to use the bigger slices over like the pizza topping sized slices. To make them into crisps I just put them between paper towels and stick them in the microwave for 40-60 seconds. After 30-40 seconds I usually check them and flip them, sometimes switching out the paper towels. Then adding more time to reach my desired level of crispiness. 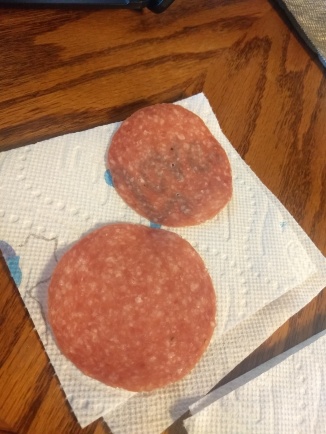 After 50 seconds
The third type of crisp is cheese crisps. These do take 15-20 minutes but you can make larger batches. they could be prepped for the week or just make some extras when you decide you want some. My personal go-to way to make them is using pre-sliced cheddar cheese. You can break one slice into 4 pieces, making 4 crisps. Also this way, vs using shredded cheese, they tend to cook more evenly.

When making the crisp you can simply break up the slices lay them on parchment paper on a pan and pop it into the oven. I usually go with a oven temp of 350, because that’s what it is auto on. Lately though I’ve been adding just a little seasoning to mine, and I’ve got to tell you its amazing. I have been going for a little sprinkle of Lawry salt and/or garlic. Super simple but it makes a big difference. Soon I might try some taco seasoning or ranch mix. If you tend to like spice crushed red peppers or cayenne pepper would be very tasty. And best of all Toddler Approved!

There it is. My group of little to no effort snacks. Have you tried any of these? What is your go-to when you’re having a snack attack? I would love to hear from you! Follow this blog to stay up to date on all the craziness! You can also find links to my social media accounts in the sidebar! I hope to see you around and don’t forget to Live Crazed!

I'm a new blogger with a passion for well.. just about everything. While everything definitely doesn't always go according to plan I definitely try! I have to boys ages 4 and 2 so I am always busy, and always looking for ways to try and make our day more more smoothly. I believe that this is possible with a good routine and organization. Also I am currently on a journey to bring out the best me. To achieve this i am: making more time for me, following the Ketogenic lifestyle, and trying to become overall healthier. View all posts by Sierra Harris

This site uses Akismet to reduce spam. Learn how your comment data is processed.